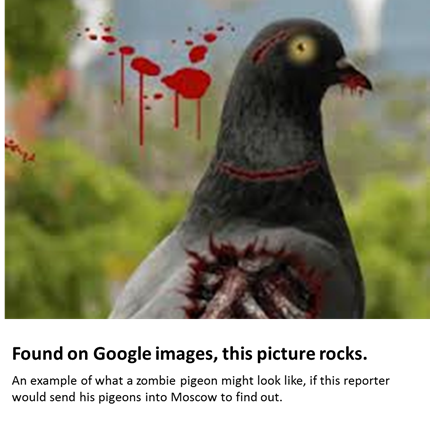 In a story that couldn’t be more perfect for this author, reports of pigeons with “zombie-like” behavior are flooding out of Moscow. Understandably, all of TNRNB’s covert carrier pigeons are grounded in that country so our access to janitorial moles are severely limited. This is a developing story, at least for those of us who depend on 1912 technology. We really must boost revenues around here. Reports gained by reading what everyone else has already written say that the birds ignore cars and pedestrians completely before they die. The birds are all found to have a common intestinal virus that some researchers say may explain the behavior and that they are no threat to human health. One expert blames the behavior on the August mating season and your fearless reporter tends to agree with him- although there is no sound reason why mating season could lead to the death of the participants, mating season only happens once a year in his house too and when it does, he can get pretty stupid for a while too. Such behavior is perfectly acceptable and should be protected by those who have a different mating season in order to increase camaraderie and good feelings amongst the population, I’ve heard pigeons really don’t get along that well but I’m more familiar with pheasants.

The whole “no threat to human health” thing tends to bother your ever vigilant newshound. It sounds a bit like, “we don’t know for sure what’s going on here but we don’t want any panic because then we’ll have to shoot a bunch of you so stay calm.” Clearly these spokesmen got their lessons from the Hanford people. Zombie pigeons really don’t sound like much of threat to this reporter, although zombie pigeon poo all a freshly washed car sounds nasty, which is why I don’t wash my cars, problem solved. What this world really needs to avoid, folk(s), is zombie cats. That is where the end lies. Cats are already merciless killing machines, if you take away their ADHD issue everything on this planet dies.

This reporter needed to fill some space so he thought he would contact Hanford just to see if they could explain this phenomenon. When reached by a gas mask fitted carrier pigeon in a cute little radiation suit, Hanford Janitorial Resources Manager Norman Sweeperkowski stated that, “there is no known side-effect of any type of radiation that we leak around here that could do that to you or any type of animal. They may lose their teeth or hair, develop tumors, give birth to horribly misshapen and defective offspring, or become Republicans- but not zombies.”

Next: this reporter will attempt to investigate the difference between a Republican and a zombie.

Why not let your friends see this too? Click a button or two or three, it's fun